We met in the early morning at Natirar.  I turned my car to go through the white columned entrance of the park established as the meeting point.  As I navigated the gravel road, the long grass lining the road swayed, catching the last breath of summer. With my elbow crooked in the open window, I carefully peered around the bend towards the parking lot.  I could make out people dressed in teashirts, shorts and helmuts, holding Starbucks cups. Their animated and friendly chatter seemed natural, reassuring.  And I thought, how bad could it be, spending a couple of hours with a group of people I never met before? Afterall, we all had one great thing in common: the joy of bicycling. 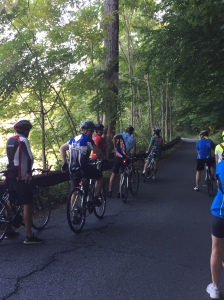 I had biked for many years before this trip with mixed feelings. I had biked with my husband, trailing long behind him on the rides. Refraining from comment for many years, he recently spoke with his feet, trading biking for golf.  I had biked with my neighbors, enduring off handed comments. Like, on one occasion, my dentist’s wife had declared that my white Raleigh from 1989 might need a tune up; but perhaps I really should consider a new bike, just to enjoy the ride more. So, I skipped the group bike rides for a few years and opted to do indoor rides (spinning) instead. After a year of spinning, with my new road bike primed and oiled, I mustered the confidence to venture out again.

This ride was attended by people of various ages including a number of men and women in their mid 50’s, a married couple in their 40’s, a single man in his 30s and 3 Rutgers college students.  All were thin, appearing quite physcially fit.  For this 18 mile ride through the rolling hills of Central New Jersey, they had brought old aluminum bikes, custom titanium bikes, new carbon road bikes, straight handled barred hybrid bikes.  One guy had the guts to bring a motorized bike.

After quick introductions, the leader mounted his bike and started the group down the country road into Far Hills and Mendham. Wooden fences, rows of picked corn stalks, bails of hay helped guide the way. The smell of cow dung and horse manure lofted in the air. The warm sunshine was soothing after weeks in the office.

We travelled quarter hours at time without seeing one car on the road, only blurs of cyclists in same-colored bike shirts, buzzing in unison, clinging to their foreman’s draft.  I remembered that the Somerset Hills attracts some pretty serious cyclists, in fact, the hilly terrain was considered a cyclists’ dream training ground. Ready or not, I was now living the dream along side them.

Our leader had warned that there were 3 large and assorted other rolling hills en route.  Looking up the hill, I could see the group negotiated the hills just fine. However, after the 4th climb, I felt compelled to quiet my screaming lungs, get off my bike and walk up the mountain. That happened at least 3 more times.  But at least I was not the only one walking.  The married couple who had just gotten on their bikes for the first time in 10 years was behind me (but who’s keeping score anyway).

Being in the back of the pack has its disadvantages. During this two hour ride, I had little chance to chat with anyone. The group was cordial enough in that they waited at every fork in the road for the remaining riders, to make sure the group stayed together. However, every time I would catch up to the group, it just worked out that they would start out again, having fully taken their break.

So I was clearly in the back pack. Did it matter to me? Well, it was not new information to me after my previous group rides.  But I had to face the fact – my lungs and my glutes could only take me so far, so fast, no matter how much I trained, no matter what bike I road.

We made it back to the parking lot of Natirar before noon. I disembarked my bike, placed it on my bike rack and looked around to say my goodbyes. I chatted with a woman as I was walking to my car who said that she was going to lunch with a couple of the women in the group.  I walked back with her to the two other women and we discussed where to go. Fortunately, being from the area, I could recommend going to one white table clothed Italian restaurant on Main Street over another. (However, whether we would be served or not, given our attire etc. was a matter I hadn’t fully considered.)

Fortunately, there was a third restaurant on Main Street that was just right. We grabbed cold sandwiches, iced lattes and huddled together at a small table outside. Hurds of cyclists buzzed by but did little to distract our attention.  We had lots to talk about – biking, hiking, travel. One woman had just vacationed in Portland Oregon with her family. I relished the details about her excursions to Mount Hood and on a unique micro brewery tasting trip on a group bicycle. (I had experiened Portland, but not like that.)  She had gotten advice on what to do in OR from the other woman in the group that grew up in Oregon and had attended Reed college. The third woman was from Carroll Gardens, Brooklyn, my old stomping ground.  We touched based on the latest restaurants on Smith Street and theatre openings in Dumbo. Mostly, we laughed and joked about the trials of our day’s adventure.

In the end, I felt warmly touched by these women. I also felt happy to renew the connection to my beloved pasttime and grateful for the opportunity to rediscover myself as a person that not only loves biking, but also travel, restaurants, Brooklyn and more. I am not certain but I think there will be more to come on all that.

We ventured to Sandy Hook, the New Jersey arm of Gateway National Park. I sought this spot out for a family outing to hopefully photograph a one-of-a-kind sunset. This barrier beach juts 6 miles North into the Atlantic Ocean from its base in the Highlands NJ, enclosing the south end of the horse-shoe shaped New York Bay. The site can only be accessed via Route 36 in Middleton, NJ (birthplace of Brian Williams of MSNBC News), approximately 10 miles from exit 117 of the Garden State Parkway.

Sandy Hook is considered the northern outpost of the Jersey Shore and a favorite for day trippers.  Distinct from its seaside brethren, the landmark features three expansive brown-sanded bay beaches, lifeguards in season, ample parking, picnic and bathroom facilities.  However, with no restaurants or commercial businesses in the park, the alimentation policy is “strictly bring in and take out”.

Seeking a more mindful experience, we ambled beyond the beach areas to the historic district at the northern end of the peninsula. Fort Hancock was an United States army outpost from 1895 to 1974. The site was used to manufacture artillary to defend the Atlantic coast and New York Harbor. The first of many concrete gun batteries was erected Sandy Hook in 1890. In World War II, manufacturing switched to anti-aircraft guns, and later, surface to air missles. Vestiges of these uses are displayed for public viewing.

We were fortunate to time our vist with a “Twilight by the Bay” tour given by a national park ranger. We were delighted to be able to view the inside of a recently opened and restored Fort Hancock Officers Residence built in 1898. (On the downside, other residences and visible army buildings in the fort were closed and in obvious states of distress and disrepair.) Our inside tour also included one of the concrete gun batteries built in the 1890s, a cold, dark, and imposing experience. Lastly, as the shadows began to climb, we scrambled over to the Sandy Hook Lighthouse, circa 1764, the oldest working lighthouse in the US. Scaling to the lighthouse beacon just at sunset, I was able to indulge my yearning to photograph the Sandy Hook sunset.

Although clouds covered most of the horizon, I was able to enjoy the colorful hour with my family from the 7 story height.  All in all, mission accomplished.